An opportunity arose for the church to purchase the old St. Mary’s Church Hall.

Ferndown Evangelical Church sold those premises in Ferndown, purchased the leasehold of the buildings in Corbin Avenue and merged with the fellowship which had been planted by Pinehurst Chapel to become “The River of Life” fellowship.

John Berridge was Pastor, and the church was known for the faithful preaching of the Word, and for being friendly and loving. There was a strong music group, with singers, guitar and drums and a youth worker was employed. The children’s work was flourishing and there were various outreaches into the community. The church was getting pretty full, and it was sometimes difficult to get a seat, so the leaders started to look at the extension of these building but at that time it went no further. In the late 90’s the “Bus Stop” work started in a very small way. It has grown significantly over the years and has helped many folk on the estate.

In the years after the millennium the church started to shrink and finances were becoming strained. Various individuals prayed earnestly for the church and those who have attended.

John Berridge retired and many weeks were spent seeking a new Pastor. It was finally decided that the church would continue for a time without an employed Pastor. There were two elders and the church was served faithfully by speakers from outside for some time.

Meanwhile… a larger church in Bournemouth, Moordown Baptist, began to seriously consider the idea of church planting. After a time of prayer and consideration, a group of 25 held an evangelistic carol service in the Barrington theatre. 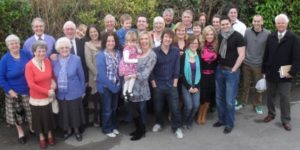 The River of Life Church continued to shrink. With no pastor and an aging congregation, possible closure was considered.

Meanwhile, the Moordown church plant began meeting regularly on a Sunday morning at the Barrington theatre. From time to time people from the River of Life would visit the church plant and so gradually the two groups began to know each other’s work.

The Moordown church plant were preparing to start meeting as an independent church in West Parley. Just days before the first meeting was due to take place, the hire of the new location fell through. However, the same week, the River of Life Church proposed to the church plant that the two fellowships should join, under the leadership of the Moordown plant, meeting on and witnessing to the Heatherlands Estate.

The two churches met together for a series of meetings, then both groups agreed to merge.

The first meeting of the new, independent Hope Church Ferndown took place, meeting at the Heatherlands Centre as the church building was now too small. Mike Mellor was the pastor and the church grew to a congregation of around 80 with a thriving children’s work once more.

Two couples were “sent out” from the church for different ministries: Jimmy and Josie left to go to Bible College, prior to going into full time pastoral ministry. Alistair and Anna became MAF missionaries, initially in Arnhem Land, Australia.

The church partnered with Christians Against Poverty to set up the East Dorset incl Ringwood CAP Centre.

Mike retired from his role as Pastor. After a time of seeking God’s will, Giles Woodcraft came to preach and in October the church voted unanimously to ask him to work full time for the church, which he began doing in April 2016.

Meeting in a community centre didn’t feel ideal due to the amount of work needed to set up and pack up each week. We began to pray, asking the Lord to show us whether we should make plans regarding the building in Corbin Avenue, but felt strongly that at that time the Lord wanted us to concentrate on building up the body of believers.

The Heatherlands Centre began plans for redevelopment, meaning we could not meet there for a while. We made the building in Corbin Avenue more usable with new chairs, lighter decoration and a general clear out to make the main worship area feel more spacious. It became evident we were unlikely to return to the Heatherlands as the church recognised the Lord had moved us out as well as there being practical difficulties in a return to the now re-branded “The Centre, Ferndown”.

Aware of the limitations of future growth at Corbin Avenue and some of the facilitates needing improvement we decided to employ an architect and make some plans. The Lord led us to an architect quickly and without launching a building fund we had received funds to cover architect costs and planning permission fees.

On January 31st we received full planning permission to commence the redevelopment work within three years. We held a gift day when God’s people gave generously, so that over a quarter of the cost of the project is covered already. Over the course of the year we have become a Charitable Incorporated Organisation (CIO) to give the church a robust legal structure to go into the next phase of it’s work.

We look back over the last 9 years and rejoice that 13 individuals have shown their faith by being baptised.

The CAP debt centre has seen 17 people become free of financial debt and 9 people have come to acknowledge Jesus as their Saviour.

“…he who began a good work in you will carry it on to completion until the day of Christ Jesus.”

Communal worship is continuing at Corbin Avenue on Sundays at 10.30am for all who wish to attend. The meetings are held outside, so masks are not required. You do not need to book a place to attend a meeting, but we will need to record your name and contact details for “Track and Trace” purposes.

Midweek meetings are currently being held via Zoom – please contact us for details if you would like to attend.

You can find our Youtube channel here . Please do contact us if you have any queries, prayer requests or if you would like an further information.

All midweek meetings are currently being held on Zoom.